“Wherever there is light, one can photograph.” - Alfred Stieglitz

It's wonderful to be photographing down at the shore again. Don't get me wrong, I've enjoyed my recent studies of Raleigh and Cary and the neighboring areas near my North Carolina home. Documenting some of the history of a place, especially ones so vital and dynamic as the state capital and vicinity, is an honor and privilege. I am always grateful for the liberty to go where I wish and photograph what I like. And I'm glad to be able to share my work with you.

The Delaware shore, in my experience, is the equal or better of most any beach area on the planet. At once both commercially developed with many shops and homes and yet still abundantly wild and protected, the state has an extensive seashore in its state park system where developers will never build. The parks maintain not only some of the loveliest sandy beaches and inshore ponds on the east coast but also protect numerous wild bird, turtle, and fish species. And the joy of my summer base in Rehoboth Beach in slower lower Delaware is that I not only get to enjoy the expanse of the Atlantic coast to the east and the Delaware Bay north of Lewes but I also have the pleasure of the Rehoboth and Indian River Bays to the west and south. So in every direction, the sun, sky, nature, and light combine for endless waterside photographic opportunities.

As you probably know, I have taken and shared numerous sunrise and sunset photographs. And I love evening photography because the light is usually nice with soft, long shadows and I don't have to rise before the cock crows to get on location. Plus, the golden hour, sunset, and the blue hour afterwards result in some truly spectacular images. Despite this, I think sunrise has this all beat. Personally, there's something just so satisfying about rising long before dawn, traveling to a location to take some images, and finding the rising sun and early morning sky cooperating nicely for me. And the best part is I'm almost always the only one there.

After a four o'clock wake up, it was time to brew a quick coffee and load my bag and tripod into the truck. Possessing a surf tag also means I have unlimited free access to many of the Delaware state parks, including the one at Cape Henlopen. Usually when I drive there, it's to lower my tire pressures and drive on the beach for a few hours of surf fishing. But this morning, I parked in the small lot near the pedestrian dune crossing, finished my coffee, and headed off towards the water with my gear. 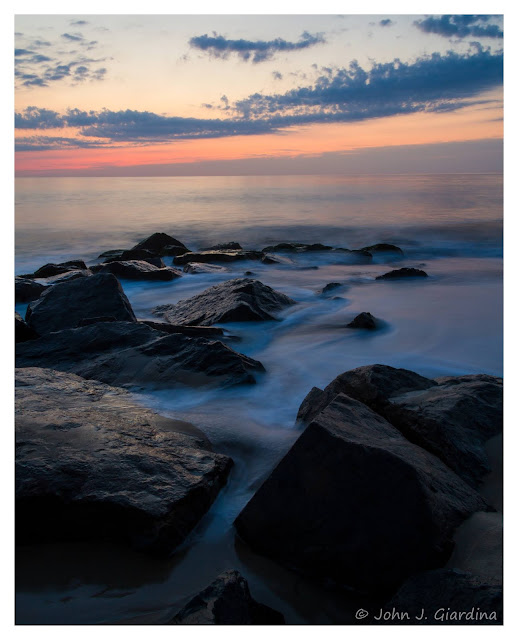 I love this group of rocks that form a natural jetty protecting the beach from erosion and demarcating the southern limit of truck parking on the sand. Since it was only about five o'clock now, I set up my tripod and ensured my camera was set correctly and functioning properly. My hope was to capture several long exposures of the surf interacting with these rocks, slowing the shutter speed to blur the motion of the water as it passed around and over the rocks. As the sun slowly rose over the next hour, light starting glowing from the horizon putting some nice color in the sky and illuminating the rocks and breaking surf just enough to be pleasing.

It's tempting to really push the time the shutter is open but I wanted to maintain a bit of texture in the water instead of it getting too creamy. I captured this image at ISO 100 to minimize image noise with my lens set to 17mm. My aperture was set to f/22 and I allowed the shutter to be open for four seconds, just right to create the effect I was after. I took several images of this composition since each break of the waves resulted in a different pattern of water flow through the rocks. If you look closely just below the horizon on the right side of the image, you'll see the bit of sea spray from the crashing wave that didn't quite disappear during the extended exposure.

I like this image because I'm really starting to appreciate the more subtle aspects of a summer sunrise. The period just before the sun crests the horizon can produce some really nice, warm light that caresses the foreground instead of overwhelming it. And the more gentle glow in the sky keeps the image balanced in a way a spectacular auburn cloud display cannot. I recently posted this image on my social media accounts and it seems to be fairly popular with you, my audience, as well. Thank you for that and all of your support.